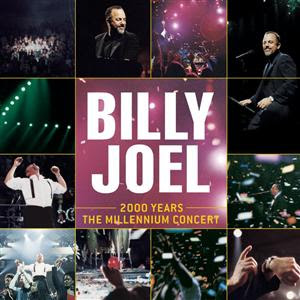 It was the Millennium concert and I was attending. Back in October 1999, while having dinner with close friends, the conversation of New Year’s Eve came up. It would be the biggest New Year’s Eve that we were ever going to celebrate in our lifetime. Our friends Jackie and Mike wanted to know what big plans we had for it.

I glanced at Nancy (my wife at the time) and shrugged. We weren’t really sure. Someone brought up the idea of going into the city to see the ball drop, and then somehow, we thought about going to see Billy Joel, who was giving a concert at Madison Square Garden. Hmmm, MSG on New Year’s Eve with Billy Joel? It sounded great! Even though I was skeptical based on the last (and only) time I saw him perform, I was willing to give this a shot due to the fact that this was New Year’s Eve and the grandest celebration in the world.

We looked up ticket prices and almost choked. Best seats in the house? $1,000. Was that a misprint? Nope, that was the price. Unbelievable. We paid $250/ticket for our pass into the show. Normally, I wouldn’t have spent that much money on a ticket, but when Mike said that he would drive and I saw how excited everyone else was, added to the fact that it was the eve of the Millennium, I caved to the peer pressure and spent the money. $500 for my wife and I to attend this concert, and that was before parking and any other additional expenses that popped up on that evening.

1999 was an odd year and as the end came ever closer, people were more and more worried about Y2K, the apocalypse, and the end of times. It was a strange time of year for us all. We didn’t buy into any of that hype, but we wondered if it would affect the concert goers or the people in New York City.

Mike drove, as promised, and we got into the garden around 8:30 as the show was scheduled to start at 9:00. We knew it wouldn’t begin at 9 on the dot, but we wanted to see our seats and get a feel for the night’s events. Our seats were actually decent ones with a great view of the stage. Were they worth $250? No, but they were decent seats.

Around 9:15 the lights went down and Billy took to the stage, seated at his piano. He opened the night with a classical piece that went right into Big Shot. With the powerful song beginning played at high volume, the crowd leapt to their feet and shouted out their love. The night had begun and we were ready for anything and everything.

Movin’ Out followed and Billy was revved up and in rare form. You could tell that he loved playing for the New York crowd that night. When Movin’ Out ended, he welcomed everyone. Billy talked about how most people were too chickenshit to do anything that night, but not this crowd. He joked about the high ticket prices, insinuating that the cost was not his fault. He then started to prove how he was going to do everything in his power to make that concert worth every penny we spent on it.

It was time for an audience vote. We got to choose between hearing Vienna or Summer Highland Falls. Three songs into the concert and Billy had already destroyed the awful memory of the last time I saw him live. Both of these songs were great ones, but Vienna had very special meaning to me from my teenage years, so of course that’s the one I wanted and I screamed as loud as I could when it was time to vote for it. Unfortunately, the rest of the crowd was not in agreement. The ovation for Summer Highland Falls was overwhelming. And so it goes… Summer Highland Falls was played and played well. The night had only just begun.


The next three (plus) hours were filled with nothing but Billy Joel giving his all, perhaps the concert of his career. Hit after hit after hit after hit were played. Pressure, New York State Of Mind, Angry Young Man, Only The Good Die Young, the list went on and on and so did Billy Joel. Only The Good Die Young sounded exceptional. Bill’s performances were all tight and perfect. He mesmerized the crowd through music and we all got lost in the moment. I’ve never been so enthralled with a musical performance.

Joel was on fire that night. The hits kept on coming and we stayed on our feet and kept in singing. At midnight he broke out the “Happy New Year!” chant and the countdown. Then he played Two Thousand Years followed by Auld Lang Syne. You would think the concert was over or near the end at that point, but Billy wasn’t having any of it. He continued to perform.

The River Of Dreams, gave way to an impromptu Purple Haze, which led to one of the all time greatest Joel songs ever, Scenes From An Italian Restaurant. Wow! And the night STILL wasn’t over. A rock and roll medley of Zeppelin, Elvis, and the Stones followed with Billy stomping on the top of his piano, rocking out, and making sure that we were still having a good time. My level of respect for him skyrocketed. He not only made up for the last concert, he did his damndest to make me get my (mega)money’s worth for that show.

The finale of the evening came in the form of Piano Man with the entire Garden swaying back and forth and singing most of the song while Billy played piano and listened. I still get chills over my body just thinking about it. It’s an experience that can never be duplicated.

The Millennium concert at Madison Square Garden is probably one of the best shows I’ve ever seen. Billy Joel did everything he could to make that concert worthy of what everyone spent on it. While not worth $1,000, I would have to say that I came very close to getting my money’s worth. Most importantly, Joel solidified my love for him as a performer. I would definitely see him in concert again if the opportunity ever arose. It was an amazing end to the decade, century, and millennium. No one died, the computers stayed on, and the world continued to move forward.


SetlistBig Shot
Movin’ Out
Summer Highland Falls
The Ballad of Billy The Kid
Don’t Ask Me Why
Pressure
Just The Way You Are
New York State Of Mind
I’ve Loved These Days
My Life
This Is The Time
Allentown
Prelude/Angry Young Man
Uptown Girl
Only The Good Die Young
I Go To Extremes
Goodnight Saigon
We Didn’t Start The Fire
Big Man On Mulberry Street
Miami 2017 (Seen The Lights Go Out On Broadway)
And So It Goes
Two Thousand Years
Auld Lang Syne
The River Of Dreams
Purple Haze
Scenes From An Italian Restaurant
Good Times, Bad Times/Suspicious Minds/Dance To The Music/Honky Tonk Women (medley)
It’s Still Rock And Roll To Me
You May Be Right
This Night
Souvenir
Piano Man
Posted by Ryo Vie at 6:00 AM

The Greatest Album Is...

The Best Of The Guru